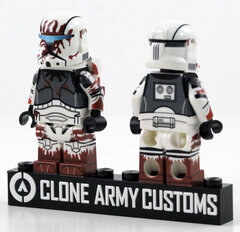 As we phase into our 360 arm prints we're phasing out of the older style prints.

RC-1207 "Sev" is a clone commando and sniper of Delta Squad. Sev's superior combat skill is very useful and helped turn the tide on many occasions. Sadly Sev became overwhelmed by combat during battle on Kashyyyk and is so far unaccounted for.